Failure seems to be much in the news lately.

Over the space of just a few days, I came across several interesting items in the New York Times (What if the Secret to Success Is Failure?), the Harvard Business Review (Three Ways to Turn Setbacks into Progress), and a blog post from The 99 Percent (Why Success Always Starts with Failure).

I leave it to the reader to ascertain why this is such a popular topic, but I will use it as impetus to discuss the analysis of potential failure, extending the use of  tools often used in (among others) the aerospace industry.  These are the failure mode effects analysis (FMEA) and failure mode effects and criticality analysis (FMECA), information about which may be found here and here. 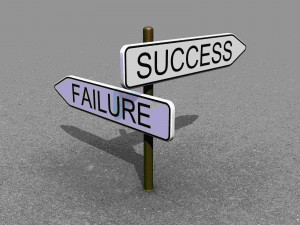 What I’m suggesting is not an exact application of these disciplines, which are geared toward understanding how lower-level component failure in larger systems can lead to systemic failure (and in the case of FMECA, to what extent). But, suitable modification and application of these tools seem to me to provide an excellent model to determine if you or your organization are on the way into one or more failure modes, even if only to a first-level analysis.

As noted in Malcolm Gladwell’s The Tipping Point, published in 2000, little things can make a big difference.  This shouldn’t be news.  But in the day-to-day work to get things done, the little things can get lost in the big rush.  Scaled up, it reminds me of something I’d heard applied to the headquarters operations of several federal agencies, describing them as places where, “…the urgent drives out the important.”

Pay attention to the little things.  They’ll make or break you.

Questions:  Do you strive to avoid failure? Is it possible to incorporate failure into a productive system? How do you deal with failure? How do you even define it?  Is failure an option? Is it desirable?