I took some time today to try to catch up on readings that have eluded me owing to other, perhaps more pressing matters. An article in the December 2011 issue of Communications of the ACM 54(12) caught my eye, with the engaging title of “Visual Crowd Surveillance through a Hydrodynamics Lens”, by Moore, Ali, Mehran, and Shah (included just for the sake of completeness).

In summary, the authors describe a means of analyzing the movements of crowds en masse using basic principles of hydrodynamics applied to multiple frames of video sequences. They can–with a bit more noise–follow individuals amongst masses of thousands, such as enter the New York City marathon! 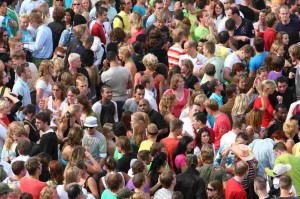 Their analysis is based on adapting the same forces that act on particles in a fluid, including restrictions on movement caused by neighboring particles (people), flow vectors (direction and speed of flow), boundary conditions (rights of way, walls, etc.), and more,  even taking into account personal preference, motivation, and direction. Their presentation is quite convincing, and makes for interesting reading. I’m always intrigued by the way various phenomena across a rather broad expanse of scales may be described by common principles; this is a fine example of that. Highly recommended!

Questions: Are you aware of ways in which your behavior is impacted by those around you? Do you ever find yourself moving in a given direction–either physically or emotionally (or both) because of forces of which you are not entirely aware? How can/do you adjust your trajectory to take advantage of such flow, or to fight against it, should that be more suited to your goals?