A recent report from the California Academy of Sciences caught my eye, as it seemed to have implications for organizational dynamics. 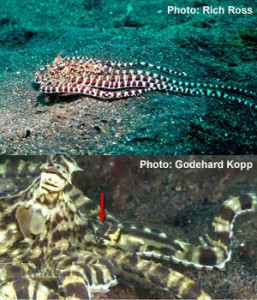 Summarized here, with a video of the interaction here, the report describes how a fish has developed the capability of imitating the look of an octopus that imitates the look of potentially dangerous fish, thereby allowing the octopus and the second-level fish to exist—and, I suppose—thrive under conditions that would otherwise favor the predators they’re trying to avoid.

Complicated, I know. But it did put me in mind of how some people behave in their organizational environments.

I have often seen folks who take on the behavioral aspects (including, in some cases, style of clothing) of those higher up on the table of organization. Whether consciously or not, it always seemed to me that this “protective coloration” was done either to curry favor with the organizational superior, or just to hide out in their presence, so they wouldn’t be noticed.

While I can’t document specifics, it seems to me that there may have been others lower on the chart who imitated the person doing the imitating, and for similar reasons. Who knows how widespread across an organizational structure such mimicry might be?

Questions: How much of your workplace behavior is meant to protect you from threats? Are those threats perceived, or real? Does the energy that goes into such self-protective behavior affect your productivity or your ability and willingness to head out in different directions? What would happen if you were to give up your protective coloration, and present something closer to what you really are?