As of this writing, the successful landing of the Mars Science Laboratory (aka Curiosity) is old news, but the technology that allowed it to happen and also allowed me to partake of the excitement is what I wish to address today.

The night of the landing, I was exhausted—so much so that I just couldn’t get my act together enough to get into the office to watch it all on NASA-TV on my desktop monitors. So, I fired up my iPod Touch from my chair in the living room, accessed a portal, and proceeded to watch on that very small screen.

And then I realized what was happening. 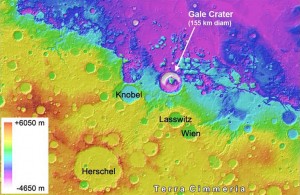 I live about four miles outside of a very small town in southwest Montana. I mean, we’re talking rural here. And yet, I was able to watch the first images from Curiosity almost as quickly as they were appearing on the screens at NASA’s Jet Propulsion Laboratory, the site of mission control.

Think about it: Here’s a one-ton technological marvel that landed on Mars via a very complex and untried Skycrane after having traveled for almost nine months. Very few course corrections, split-second adherence to timelines, and landing within a couple of kilometers of its nominal target. Photos within minutes of landing, crossing the void and being distributed around the world in near-real time, and—specifically—right to my little screen. The prowess, genius, and perseverance of thousands of people all contributed to this success, and my incredible satisfaction at being part of that chain.

It all just worked.

Questions: Do you assume that your plans will always “just work”? When they do, are you complacent?  Are you aware of all the contributing factors that go into your plans working? Do you undergo any contingency planning, just in case they don’t work?