The era of the Space Shuttle is over.  Atlantis landed today, after a perfect trip to the International Space Station (ISS).  Note that I referred to this voyage as a trip, despite NASA’s insistence on referring to such things as “missions”, or “expeditions”.  I mean no disrespect–to the contrary!  I’ve been a space cadet since before NASA existed.  I cut my teeth on Buck Rogers, Captain Video, Tom Corbett, and more.  When I got older (I’m not sure I’d yet “grown up”), my professional leanings provided a route to apply to be a mission specialist on the then-new Space Transportation System, aka the Shuttle. 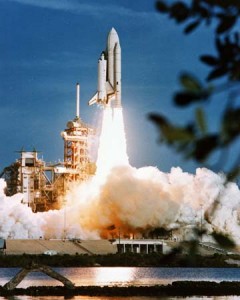 I never made the cut, and circumstances and decisions led me away from any follow-up attempts, but I’ve assuaged my yearnings by working as a contractor for several NASA offices, at several NASA field centers and HQ.  In so doing, I always felt that I was not just supporting space exploration, but contributing to it, although most of my work has been in the uncrewed arena.  There was one period where I was a project manager on some space station work at one of NASA’s field centers, and was in the company of many NASA higher-ups watching the Challenger launch on closed-circuit TV when the explosion occurred.  I can’t even begin to tell you what it felt like to be in a room with people whose friends and colleagues had just died.

No matter; I followed the growth of the crewed space program avidly, and kept hoping against hope that all these “missions” would really and truly turn into one–that is, that we’d actually be going somewhere, someday.

This not to denigrate the truly wonderful and amazing things that the STS allowed us to do.  Imagine the world today without the launch and subsequent servicing of the Hubble Space Telescope.  Think about the close to 100 satellites that were launched from the Shuttle’s cargo bay, or how three courageous astronauts left the relative safety of the Shuttle to retrieve a communications satellite–by hand!   Given the operational and political constraints under which the Shuttle was designed, it turned out to be a fantastic engineering feat.  The brains and sweat that went into its construction and operation speak volumes about human ability to realize very complex constructs.

And then there’s the Shuttle’s role in building the ISS.   Amazing!

The design and construction of the ISS was no mean feat.  It is power testimony to the ability of people around the globe to pull together for a common goal, addressing circumstances that had not been dealt with previously, including engineering, human factors, and–to be sure–diplomacy.  We’ve learned a lot, and the ISS is truly a monument to such efforts.

It’s not, however, truly a destination, nor is it supported by “missions”.  A mission, in my lexicon, requires a destination, not a low-Earth-orbit outpost.  A return to the Moon for more than “flags and footprints” would qualify, as would travel to Mars or an asteroid, but only if we actually planned to do something once we got there. 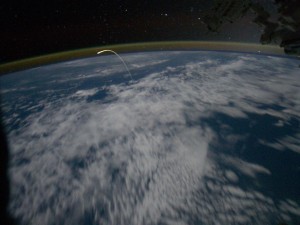 The bright arc at middle-left of this NASA photo is the first image from space of the reentry trail made by a Space Shuttle. It was taken by ISS crew members at the end of Atlantis’–and the program’s–last flight. Image courtesy of NASA.

The end of the Shuttle era saddens me–not so much because there will be no more Shuttle flights, and not even because the U.S. does not have–for the short-term, anyway–crewed access to near-Earth space.  No, I’m saddened because we could have gone so much farther and done so much more, had many, many decisions that were made early in the conceptualization stages of the STS–and even before (think Apollo cancellation)–been made to move us in other directions.

My sadness aside, with the advent of commercial possibilities for space flight and supporting activities, I’m hopeful that the profit motive will move us to places that institutional motives could not and have not.

Ad astra per aspera:  By difficulties, to the stars!  There has been and will continue to be lots of aspera, but let’s go ad astra!

Questions:  If you were in a position to do so, where would you lead U.S. efforts in space? With U.S. “leadership” in space eroding, what would you suggest we–as a country–do to support enhanced crewed space exploration?  Given limited resources, how would you justify it?  And, given the history of the U.S. crewed space program, what would you have done differently, perhaps with an eye towards leading us in some other direction?

Follow-up question:  Given that most folks reading this weren’t involved in Shuttle activities, are we justified in questioning the decisions that went into its design and operation?  Can you generalize this question to your own activities, generally?