I’ve always been fascinated by spaceships–first, the science-fiction variety, with the then-requisite pointy nosecones, swept-back wings, and cockpit canopies, all of which made them look like super, super-fast fighter jets.  As I got older (I’m not sure I can say “matured”) and began to work as a contractor in and around the NASA environment, I learned that such constructs were just that–fictional constructs–and that the requirements for launching rockets into space didn’t call for such bells’n’whistles.

Indeed, the reality began to outstrip the youthful misunderstandings, as launch vehicles became increasingly sophisticated and with the ability to launch extremely massive satellites into Earth orbit.  The Space Shuttle is one example of this, with its multisegment solid rocket boosters and the exquisitely designed and -performing Shuttle Main Engines powered by the tons of fuel in the external tank.  What a site to see at launch!

Other, to-date non-man-rated boosters have been carrying quite a load for some time, with capabilities that are considered particularly important now that the Shuttle is no longer operational:  NASA is under direction from the Congress to develop a next-generation heavy-launch booster, and quick!

I’ll not address that requirement here, other than to note that I don’t think it a good idea to mandate a specific technological advancement by a specific time. with a severely constrained budget.  Part of that worked for the Saturn V and the Apollo program, but the times were different, and money was almost not a part of the equation.

I mention all this because of some recent discussions surrounding a phenomenon that takes place at the launch of Boeing’s Delta IV Heavy boosters:  At launch, there appears at the base of the booster (and often climbing higher) a burning cloud of hydrogen that is so startling to those not in-the-know that it looks like the launch has failed.  Take a look at this photo of a routine launch. 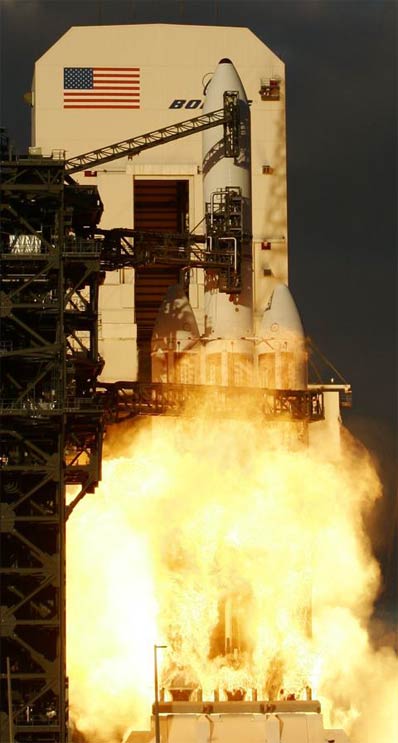 Appearances aside, this is a designed-in component of the normal launch sequence, as excess hydrogen gas that is pushed through the engines just before launch to optimize the hydrogen/oxygen mixture for ignition is burned off with radial igniters.

But some folks are concerned about the disastrous appearance–enough so that the United Launch Alliance (the organization responsible for conducting the launches) is exploring ways to minimize this burn-off.  Check this link  ULA Plans Fix For Delta IV Heavy Launch Flame for a bit more information.

Admittedly, I’m not an expert (and would love to hear from someone who is), but this kind of effort to reduce what appears to be a purely cosmetic problem seems like a waste of resources.

Whatever all the facts are, the situation as presented in various media (and as described here) led me to wonder about “selling the sizzle”, a reference to an oft-quoted dictum of marketing, that one should “sell the sizzle, not the steak”.

The burn-off is known and expected.  The vehicle is not in any danger as a result of it.   Why expend the time and money to fix what isn’t apparently broken, just for the sake of appearances?

Questions:  How do you decide how to allocate limited resources?  How do you decide what’s steak and what’s “sizzle”? From whom (or what) do you take your cues and/or actionable direction?  How strongly would you fight for steak over sizzle?