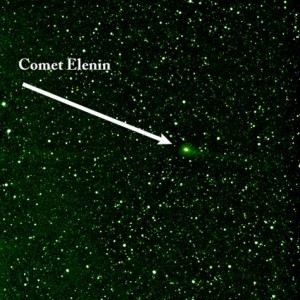 Several weeks ago, a friend asked me what I thought about the advent of Comet Elenin, a long-period comet discovered in late 2010.

What he found noteworthy was that the comet would be closest to Earth (perigee) during the Jewish High Holy Days this year, which occur over a 10-day span, late September into early October.  He expressed some concern about the comet’s gravity affecting Earth, leading to (among other possibilities) earthquakes, and was struck by the synchronicity of the Jewish New Year and Day of Atonement and the appearance of the comet.  “Don’t you find that interesting?’, he asked.

My friend knows of my interest in things astronomical, and that I’m a usually reliable source of information.    I do think he was sincerely asking me for a “read” on the situation, although he was clearly convinced that he had the facts straight, and was looking for an authoritative assessment that his perspective was an accurate representation of the situation.

Alittle research from a site whose bona fides are usually above reproach showed the first crack in his position:   Comet Elenin will not be closest to the Earth during the period he mentioned; that event window takes place about two weeks later, in mid-October.  Perihelion—closest approach to the Sun—would occur over two weeks before the period in question, so that wouldn’t be a good match, either.

In a follow-up phone call, he got excited about the timing of the earthquakes that occurred a couple of days ago in Colorado and Virginia and wondered about their cause, opining that the comet was involved, and that he thought we could expect more and larger such as perigee approached.

I did my best to explain to him that the comet is actually quite small—on the order of 3-4 km in diameter—but he said that perhaps it was a “super-heavy” beast.   I further tried to explain that were this to be the case we would have observed changes in the orbits of other Solar System bodies, and no such disturbances had been noted.   He’s not a mathematical sort, so I avoided trying to educate him about how the factors determining the force of gravity between two objects, by which I would have hoped to demonstrate that Comet Elenin’s affects on terrestrial dynamics would be infinitesimally small, owing to its small size (and mass) and the distance at which it will “approach” Earth (some 22-million miles), never mind how far away it was when this week’s ‘quakes occurred.

Knowing my friend, with my lack of enthusiastic support for his analysis I have little doubt that he considers me benighted, his respect for my analytical skills and scientific bent notwithstanding.  As is often the case, we agree to disagree, and go off into other areas of our respective lives.

I was left wondering why it is that a large number of our populace find it appropriate not to understand things on an analytical level, preferring to believe in supernatural causes, conspiracy theories, and contrary-to-fact opinion.

I wonder if the largest part of it is lack of technical education, coupled with a lack of interest in learning about just how incredibly interesting and fascinating the reality of the Universe is.  If so, this is another stunning indictment of our educational system long-term, as my friend is about my age.

I also think it is just easier to put such events as Comet Elenin down to other-worldly causes.  I find this lack of curiosity anathema, and do my best to keep my own thinking on a clearly secular plane.  I’d say, “different strokes for different folks”, but the impact of this kind of nonthinking on our world is too dire to just shrug and walk away.

Thinking can be fun, but it can also be hard work, and I fear that too many people aren’t interested in working that hard.