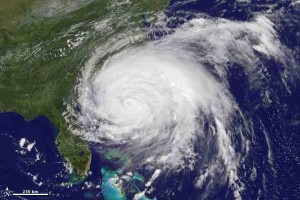 As I write this, the Eastern Seaboard of the U.S. is feeling more than a bit of what Earth’s dynamic systems can evince: Hurricane Irene—while weakening from its higher-powered status—is causing major disruptions to various ecological systems and those wrought by humanity, as well.  Whole areas of Maryland, New Jersey, and Delaware are being evacuated, and the mayor of New York—for the first time ever—has ordered the evacuation of several lower-lying areas of the city, and public transit, bridges, and other services are being shut down in anticipation of Irene’s arrival.  Residents of states up into New England are battening down their actual and virtual hatches for the next couple of days.  Store shelves are being emptied of groceries and emergency preparedness supplies, and President Obama has already approved a request by NY Governor Cuomo to declare a federal emergency for the state, even before the hurricane hits.

Clearly, Hurricane Irene is a force to be reckoned with even just(!) from the standpoint of human reactions in advance.  The additional effects of  what it will further bring once the storm actually hits remain to be determined.

With most of my family on the East Coast, I’m feeling quite powerless to effect any kind of support, other than advisory and moral. Therein lies the rub: Is there anything else I can do? Can I really do anything to help?

Questions: What do you do when faced with a fait accompli or an impending or extant situation about which you really can do nothing?