I’ve been self-employed for over 25 years, working as what’s called a “lone eagle”, i.e., I have no employer (just clients, thank you all very much!), no employees, and only what structure I impose on myself. Fortunately, I’m extremely self-motivated and have made a comfortable (if not lucrative) living over those years. It’s not for everyone, but it suits me just fine.

Some of my tasks make me part of larger teams, however. This morning I felt enormous satisfaction in being part of the team that worked on and successfully launched a state-of-the-art weather and climate research satellite, the National Polar-orbiting Operational Environmental Satellite System (NPOESS) Preparatory Project, or NPP, as it is mercifully known. 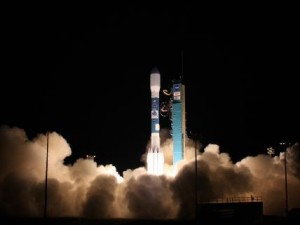 This satellite project has had a long history of technical and political challenges, of which I will provide no discussion here. For the purposes of this post, suffice it to say that the team—numbering thousands, and in which I had a minuscule role—stuck with the work and each other through it all. The results of that work were evident in this morning’s picture-perfect launch and (as of this writing, at least) subsequent deployment of the satellite. Many days and weeks of checking out all the instruments, the spacecraft bus, and communications links remain before we can all derive the satisfaction of important data about Earth’s myriad interlinked systems, but the team will chug right on through.

The team approach was also clearly in evidence this morning at Montana State University, where I was fortunate enough to be allowed to join a smaller group as they tracked their efforts to launch a satellite.

Sponsored by the Montana Space Grant Consortium, these students and associate faculty advisers successfully orbited a “cubesat“, a very small, and in many ways similarly state-of-the-art construct that measures just about four inches on a side. Using a sensor donated by the same Van Allen whose detector found the eponymous radiation belts that circle our planet, the students stuffed everything they needed to replicate and extend that decades-old work into a seemingly impossibly small container. Their joy at each stage of the launch, subsequent deployment, and receipt of signals was no less than that of the larger team I described earlier. I had no involvement with their efforts, but was clearly accepted in our mutually satisfying celebrations, for which I am very thankful, indeed.

So, congratulations to all the teams involved in what resulted today, and what will continue to be successful efforts. I’m a lone eagle, but I’m very glad that not everyone is.