I’d been having a long-term conversation with a friend, largely about his ongoing state of anxiety.  He came to realize

that he was concerned about not being prepared to deal with things–not when they arose, but before they arose.  He’d spend hours, perseverating about things as they are, and projecting an infinitude of possible futures.  I tried to get him to see that all he really had to work with was the present, as the past is over and done with, and (as he noted) there are futures to infinity.  Only by remembering to “be here now”, as proffered by Ram Dass (formerly Dr. Richard Alpert) in his 1971 book of that name, could he effectively deal with things, and only by taking them on one at a time.

With time, my friend realized that what I was suggesting had merit, but that acknowledgment wasn’t yet enough to solve his problem:  He still suffered from a severe case of “not good enough”, i.e., he wasn’t convinced that even if he were to cut back on his solve-it-all-beforehand approach, he’d have the skills and confidence to deal with the here-and-now, enough so that he could trust such decisions to make major contributions to a desirable future.  As it turned out, that was because he still felt that he had to be prepared for everything, even not knowing what “everything” was!

Over a long series of conversations, I was able to get him to realize that his obvious successes (of which there were many) were ample testimony to his ability to handle what he encountered in his life.  He had a stable, long-term marriage, his kids were terrific, and he held professional positions of increasing responsibility and authority.  With that, a hiatus ensued, and we didn’t speak about his problem for a very, very long time.

A recent reconnection found him bright and sprightly, with a clearly upbeat approach to just about everything that had earlier caused him such difficulty.  Clearly, something had changed. 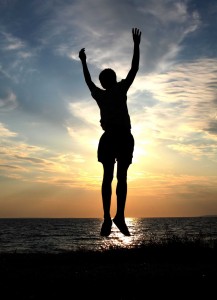 Upon query, he replied that after a lot of thought, he finally realized that all(!) he needed to do was to acknowledge his successes, that they had been gained by taking things on as they came (as suggested earlier), and that the results spoke for themselves, i.e., his decisions were by-and-large appropriate to the circumstances.  He really was “good enough”.

Simply, this evidence-based self-assessment convinced him that he didn’t have to be prepared for everything, but he could develop a mindset that allowed him to be ready for anything.  He had learned to trust his gut.

With that distinction lies the clue to stamping out those bouts of self-doubt:  First take a look at your current situation.  Be honest with yourself–don’t even consider looking to someone else for support.  If you’re really in at least a pretty good spot, consider how you got there:  No one came along, picked you up, and placed you there.  It was you who made the decisions in the moment that have led to your successes.  (To be sure, where your decisions have resulted in less-than-happy outcomes, the responsibility for those, too, are yours.)

The key is to go with your gut, and to act on it, even in the absence of brain-desired data.  Do something.  Anything.  Only results will tell you if you were right (or wrong). And, if the outcome is not what you projected, fix it!  I can’t remember where I saw this, but I offer it to you:  It’s not about making the right decisions; if necessary, it’s about making the results of those decisions right.

You are not powerless. It’s your life’s story; you write the script.

Questions:  Are you faced with ongoing anxiety that you just can’t do anything because you feel that you can’t handle everything? How did you get into that pattern? What have you done to break it? Why have such actions worked (or not)? If you’re not making changes, what’s keeping you from acting?