Activities in space and on Earth today continued the opening of a new chapter in spaceflight.

An uncrewed capsule, hight Dragon, containing a nominal mass of otherwise expendable and relatively unimportant cargo, docked with the International Space Station (ISS). This it the first time a commercial construct has docked with the ISS; previously, only capsules officially from governments have done so. 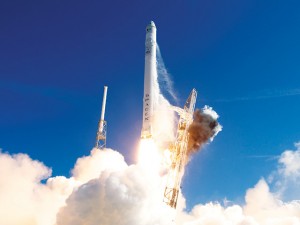 Dragon was designed and built by SpaceX, a commercial corporation bankrolled by Elon Musk, of PayPal fame. SpaceX has as its stated mandate to significantly reduce the costs of leaving the Earth, not only for low-Earth-orbit “destinations”, but also to move humans further out into space.

The technological hurdles that were overcome to allow not only the docking, but also the series of successful launches of suitable rockets, were (and will continue to be) manifold. That a feisty startup could do it is testimony to Musk’s deep pockets and his skill at forming teams of relatively young people to accomplish his lofty goals.

Less often discussed are the organizational hurdles that had to be (and will continue to be) overcome. The usual territorial imperatives apply, but beyond (or beneath) those are the hurdles put in place—both consciously and unconsciously—by the entrenched technorati at agencies such as NASA. Yet, all these hurdles have been (and should continue to be) dealt with.

The overcoming of technological and organizational hurdles is what I find so exciting, and that—for me—causes the kind of optimism and excitement that I felt during the early days of human spaceflight. I’m eager to see up with what else SpaceX and its commercial competitors (and partners) will come.

UPDATE May 31, 2012: The Dragon capsule, having separated from the ISS some seven hours earlier, successfully landed “pretty much on target” off the coast of Southern California this morning, right on schedule. What a story!

Questions: What hurdles do you face in realizing your dreams? Why do you categorize them as hurdles? Would casting them in a different light make it easier for you to address them?