A recent report addresses what appears to be a long-observed phenomenon in some circles: That bubbles in stout often sink, rather than rise.

No, this is not an effect enhanced by increased consumption of the imbibable under discussion; rather, it is a very real phenomenon, seen even by those who are not inclined to see what is not there. 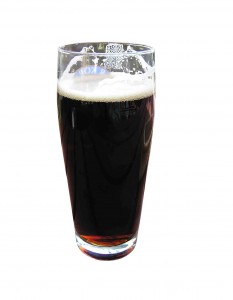 It has been assumed (and modeled, numerically) that there was an upward flow of liquid in the center of the glass, and a downward flow near the walls, and that this downward flow was responsible for entraining the bubbles and carrying them downward.

This assessment is true as far as it goes, but it turns out that the primary contributor to this effect is the shape of the glass: Not only does the effect disappear (numerically) when modeled using a different-shaped glass, but it similarly disappears when straight-sided glasses are actually used.

And you thought people went to bars just to drink.

Questions: How much of what you think you see do you actually see? How can you differentiate between the two? How far will you go to distinguish between perceived and actual cause and effect? What motivates you to investigate beyond a simple “hmmm! That’s interesting!”?