Felix Baumgartner’s October 14, 2012 leap of faith from 128,000 feet above the Earth is already history, but I’m moved to comment on it from several perspectives.

I had followed his odyssey from its inception, when I originally thought that it was simply a stunt to advertise the sponsoring organization, Red Bull. OK, it was an advertising stunt, but as time wore on and I became increasingly aware of the preparation required to accomplish this feat, I realized that there was a great deal of activity going on behind the scenes. 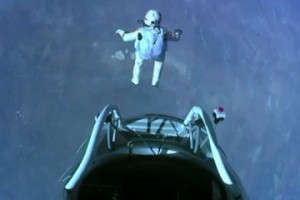 The resources required were immense, and there was significant R&D work behind the technologies. Said technologies were not just support for the top-level requirements, like designing and building a capsule to get him Up There, but also for his protective suit and the communications gear necessary to provide real-time video from several perspectives, and to monitor and report on his physical condition throughout. There was also the fact that Baumgartner found that he suffered from claustrophobia, discovered once he donned full suit and helmet.

Yet, he worked through it all.

Others have asked if there were any real scientific benefits from this activity. There were. Among them, understanding that an essentially unprotected human could indeed survive the transition from subsonic to supersonic speed (he made it to Mach 1.24, just over 830 mph at altitude). There was also the potential to affect the design of spacesuits for astronauts for better flexibility and protection in case of launch failure of crewed spacecraft. I’m sure there will be more, but such things have a way of taking some time to develop.

The main perspective for me, however, is simply that someone (or, better, several people) were able to conceive of and execute such a “stunt” with such grace and dignity. It was well-thought-out and -implemented. Sure, there were several (you’ll pardon the expression) “over-the-top” aspects, but such are necessary with a private venture such as this. Yet the bottom line is that one human put his life on the line, and did what he said he would do.

I’d like to think that anyone and everyone would be so responsible.