Biology continues at the forefront today, with a recent report that dung beetles use the Milky Way to navigate.

The experiment done to determine this connection was rather elegant; I’ll leave it to the reader to find out about that by visiting the link, above.

For the purposes of this post, never mind that I never would connect an off-putting name like “dung beetle” with such an awesome expanse as the Milky Way. It’s more that I never would have thought that such a humble creature would have the wherewithal to guide its way using something as, well, galactic as our home galaxy to find its path to a desired location.

Such a finding—as is often the case with me—put me in mind of how best to generalize the phenomenon, and find applications to daily human activities. Such connection is implicit in the questions that follow.

Questions: How do you find your way through your daily activities, no matter how humble or important? Can you trust you roadmap or markers? How do you know when you’re on or off course? How do you compensate when you find that you’ve strayed?

Biology is a long-standing fascination of mine, for many, many reasons.

One such is evidenced by some photos here, which just left me dumbstruck—not an easy task, I assure you!

As with all such things, it got me wondering about the application of such phenomena in personal and professional settings, thinking in terms of how things are either hiding in plain sight, or so blended with the background or environment generally that they’re essentially invisible.

Questions: How alert are you to “things hiding in plain sight”? How can you be sure that you’re seeing the entirety of a picture when looking at anything?What might you do differently, if you were able to see everything that was actually present? How do you fool yourself into thinking that everything you see is everything that’s there? What can you do to ensure that such a misrepresentation doesn’t have deleterious effects on your actions or decisions?

As a practitioner of several arcane technical and scientific arts, I do my share of using jargon; indeed, I often appreciate hyperpolysyllabicsesquipedalianism. In the proper setting, precise terminology conveys something very specific to my audiences, so I understand how useful such jargon can be.

I have to scratch my head, however, when I come across such terms as “controlled flight into terrain”, meaning the airplane crashed. I mean, if the aircraft were under control, why would anyone fly it into the ground (or, as a pilot friend of mine has called it, “cumulogranite”)?

Another one that crossed my ken recently had to do with an engine in a SpaceX Falcon 9 launch vehicle that experienced “rapid unscheduled disassembly“, i.e., it exploded. This is clearly distinct from a “slower scheduled disassembly” (whatever that may be), but what is gained by using the “term-of-art” phrase rather than the simpler single word?

I just don’t get it.

Questions: What jargon do you use routinely? Do you use it appropriately? What consequences might there by owing to misunderstanding arising from use? What can you do to communicate more clearly?

Take a look at this short video called, appropriately for this post, Assumptions:

Entertaining, to be sure. But there’s more here than entertainment.

As much as I try to avoid it, I find it virtually impossible not to go into a situation without preconceived notions or assumptions. Such poor going-in positioning may have to do with the person or people with whom I’ll be dealing, something technical, my own performance, etc.

Often, such prejudices are benign, but there are times when I find myself wondering how the situation’s outcome might have been more beneficial (presumably, for all concerned) were I not to have these going-in positions.

I’m sure you’ve heard some version of the old phrase, “not being able to see the forest for the trees”.  There are many such aphorisms, so—clearly—one’s inability to see big pictures owing to focus on details is not a new phenomenon. 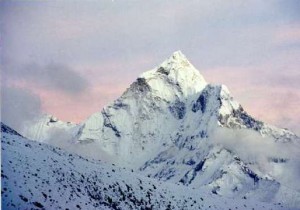 I came across an inverse view of this recently. A two-gigabyte image of Mt. Everest and its environs recently crossed my inbox. At first glance, it’s impossible to fully grasp the size of what’s presented, and not because of the details: They’re so minuscule that they’re not even noticed. Without adjusting the viewpoint, see if you can spot the yellows and oranges of the tents at the basecamp at the lower-right-center of the image. That alone will give you some insight as to what’s in your field of view. Then experiment with the controls to see just how far you have to move in to see any details—not just of the basecamp, but of any specific aspect of this incredible location.

Make the effort to visit this site. It’s exciting, fascinating…and more than a bit humbling.

Questions: How sure are you that you see everything when you look at something? What “blindnesses” are you applying when viewing a scene or a situation? How can you insure against missing something—either big- or small-picture? What are the consequences, in either case?

Much as I am loath to admit it, I must acknowledge that I’m not always (or even usually) in conscious control of my own behavior. I strive to bring forth my best, but there are times when my response to a given situation just seems, well, over the top, and usually in a negative way. Other times, I find myself responding in a way that later causes me to ask, “Now, why did I do that?” 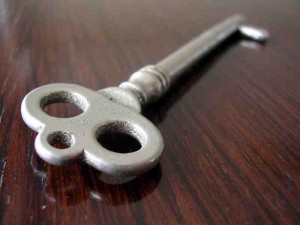 This observation, in concert with the holiday season, which is fraught with commercialism, led me to consider this article, wherein is described ways in which those who want us to buy, buy buy, subtly and often subliminally cause us to behave in ways of which we are not at all aware.

All of this got me wondering about what other ways my actions and decisions may be controlled by factors outside my conscious ones, and how my behavior might be different were I aware of them.

Questions: Do you know what causes you to behave in a given way in a given situation? Can you be sure that you are the driving force? How might you determine what other forces are at work? What might you do to shield yourself from such outside influences?

If you’ve been following these posts, you know I’m a technophile. Over time, I’ve become interested in technological utility in addition to loving technology for its own sake.

That’s why when I found this, describing the provision of information from a car’s computer onto the windshield, I found myself stopped. 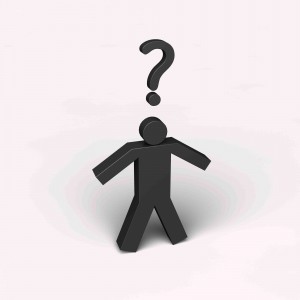 I faced a conundrum: While understanding how the information presented to the driver in a heads-up fashion could be helpful and useful, I had to wonder if the negative aspects of such additional information—presented in this (literally) in-your-face manner—might outweigh the positives.

I love information. I have found that the more of it I have to assess, the better my assessments are. I have little doubt that I could use such information to significant benefit, but given my frequent well-founded and oft-vocalized criticisms of others’ abilities (or, rather, inabilities) to drive safely, I found myself asking if I’d want this available on a routine basis.

My answer is, “Definitely not!”

Questions: Because some is feasible, does that mean it should be done? How do you decide how to proceed, in similar situations? How do you determine what the consequences of a given act might be?

I’m a long-time fan of science fiction. Hard science fiction. This means made-up stories that are based in the physical reality as we know it, or within reasonable extrapolation of the boundaries thereof: Magicians, trolls, witches, warlocks and vampires need not apply! (Oh, I enjoyed The Tolkien Trilogy ‘way back when, but that’s not sci-fi.)

One of my favorite activities is to see what these talented prognosticators (for such they so often come to be) come up with, that have taken root in the general psyche and been realized by real-world technologists. Think of such things as Heinlein’s water bed in Stranger in a Strange Land, for example.

The latest chapter in this ongoing voyage of discovery is a recent report that several NASA scientists not only think that a warp drive is possible, but are actually exploring such possibilities in the laboratory, albeit on a micro scale. If they can make it work—even at such a scale—then that will serve as a proof-of-concept. The rest is, then, simply(!) engineering to scale it up to eminently usable levels.

Questions: What causes your dreams to become reality? What stops that from happening? Do you find yourself being bound by convention? If so, do you like the feeling? What can you do to think “beyond”?

Just a quick one for today, while I compile material for a more-extensive post: 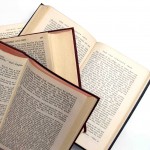 “A man who does not read good books has no advantage over the man who can’t read them.”
–Mark Twain, American writer

Questions: None. Just think about the ramifications.

News this week included a report that planet-searchers have found a “super-Earth” orbiting a star just 42 light years from “regular “(but still impressive) Earth. 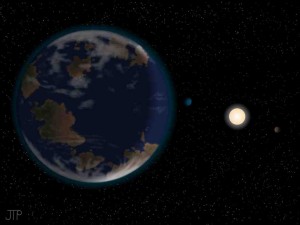 CREDIT: J. Pinfield, for the RoPACS network at the University of Hertfordshire.

[Given that distance, Bob Murphy, a colleague and friend, has suggested that we name the planet “Douglas Adams”, author of Hitchhiker’s Guide to the Galaxy, in which that number has keen significance as the “Answer to the Ultimate Question of Life, the Universe, and Everything”. I like it!]

DA (as I will call it here) was discovered upon a reexamination of data that had already been picked over. The reanalysis used new techniques, able to pull a very weak signal out of significant noise, using data from the High Accuracy Radial velocity Planet Searcher, or HARPS, a terrestrial-based telescope in Chile. This makes six planets found to be orbiting the star, with DA located in the so-called “habitable zone”, where conditions may be suitable for life as we know it.

There are still a great many “ifs” and unknowns, but it does show that possibilities do exist Out There for life.

It also shows that one should always be open to reexamining “old” data to glean new information.

Questions: Do you ever revisit an analysis (of any kind) to see signals you may be able to pull out that were otherwise hidden? What do you think might cause such a signal to be hidden in the first place? Might you acknowledge that the hiding was intentional, albeit unconscious? How can you ensure that such signals don’t get lost in the noise forever?